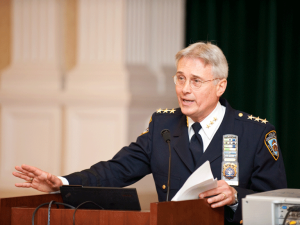 A former chief of detectives of the New York City Police Department (NYPD), Phil Pulaski holds a bachelor degree in chemical engineering and master degree in environmental engineering from Manhattan College in the Bronx, New York. While working full-time as an engineer at the United States Environmental Protection Agency, Phil Pulaski attended St. John’s University School of Law in Queens, New York at night, and received a juris doctor degree in May 1980. He passed the New York State Bar examination in July 1980, and was admitted to practice law in New York State. Phil Pulaski was subsequently admitted to practice law in the US Supreme Court, US Court of Appeals 2nd Circuit, and US District Courts for the Eastern and Southern Districts of NY.

Phil Pulaski served as a supervisory attorney in the NYPD’s Legal Bureau for several years and, as he was promoted to higher executive ranks in the department, he continued to closely collaborate with the Deputy Commissioner of Legal Matters particularly regarding the law involving search and seizure, arrest, eyewitness identification, interrogation and electronic surveillance. Phil Pulaski also provided a significant amount of legal training to members of the NYPD including 10 New York State Bar Continuing Legal Education courses.

Abbreviated as LLM from the Latin term for master of laws (“legum magister”), this degree is typically pursued by attorneys who want to gain additional expertise in specific legal areas such as taxation, criminal procedure, human rights, or intellectual property. In order to be admitted to an LLM program in an accredited United States law school, the applicant must possess a juris doctor law degree. Because the LLM transcends national borders, this degree is useful for attorneys who seek international credibility. The LLM degree is also favored by attorneys who want to become law school professors.